‘Here We Can Express Ourselves With Freedom.’ In Puerto Rico, A Trans Collective Is Reimagining Family Values

Among the rocks of their Caribbean archipelago, a group of trans artists and creatives in Puerto Rico have found their safe port. It is a harbor offering them safety and affirmation amid choppy waters. Both a natural resource and cultural construct, it has an appropriately reverential name: House of Grace.
House of Grace was founded by María José, a transdisciplinary artist and activist, in the months after Puerto Rico was ravaged by Hurricane Maria in 2017. In the midst of natural disasters and a global pandemic, when rains have flooded and the earth has been shaken, the dancers, performers and writers who make up the House have laid down collective roots, built trust and chosen one another. 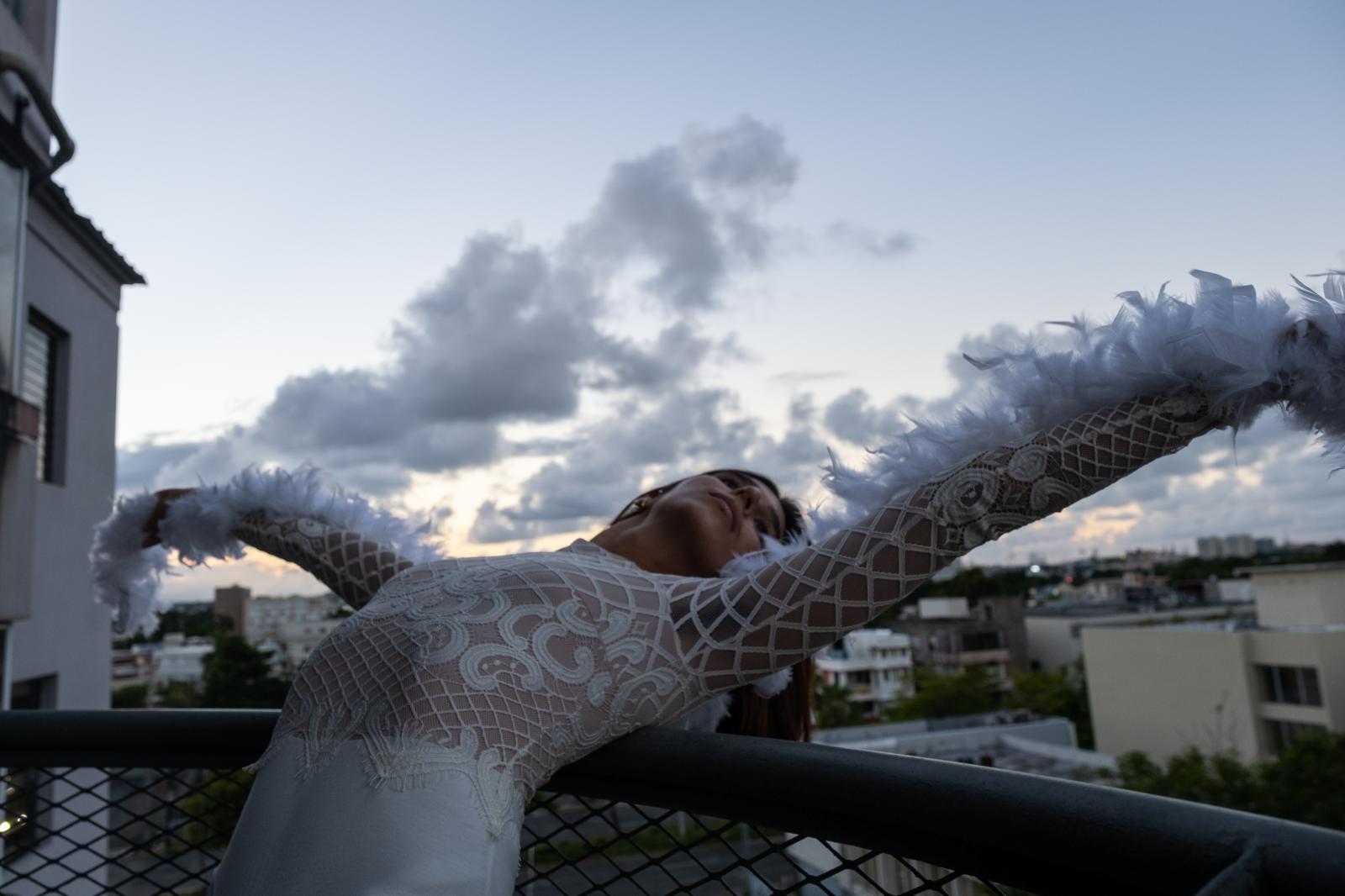 María José, 28, poses for a portrait in her apartment in Rio Piedras, San Juan, Puerto Rico.
Despite its name, the House is not a physical domicile but instead a group who work to take care of themselves, and to uplift each other’s power, beauty, and artistic talents amid a worsening culture of discrimination against queer and trans people. Over time, House of Grace has evolved into a tight-knit yet welcoming community—and a family.

“To me, a family is a group of people that are willing to support each other through the unpredictable, imperfect and complex experience of being human,” María José, 28, tells TIME. “A collective that will stand up for each other against any threat.”

María José had first gathered the group to practice dancing as a language to express liberation. That was when Lú, a founding member of the House, first learned to vogue—an opportunity to embrace their gender identity. Lú now speaks of voguing with the same sparkle that they use to describe their House: “I was very discriminated against as a ballet dancer. I had always been very feminine, [and] was constantly told I had to be more masculine,” Lú explains. “In vogue I found a celebration of the nonbinary.” 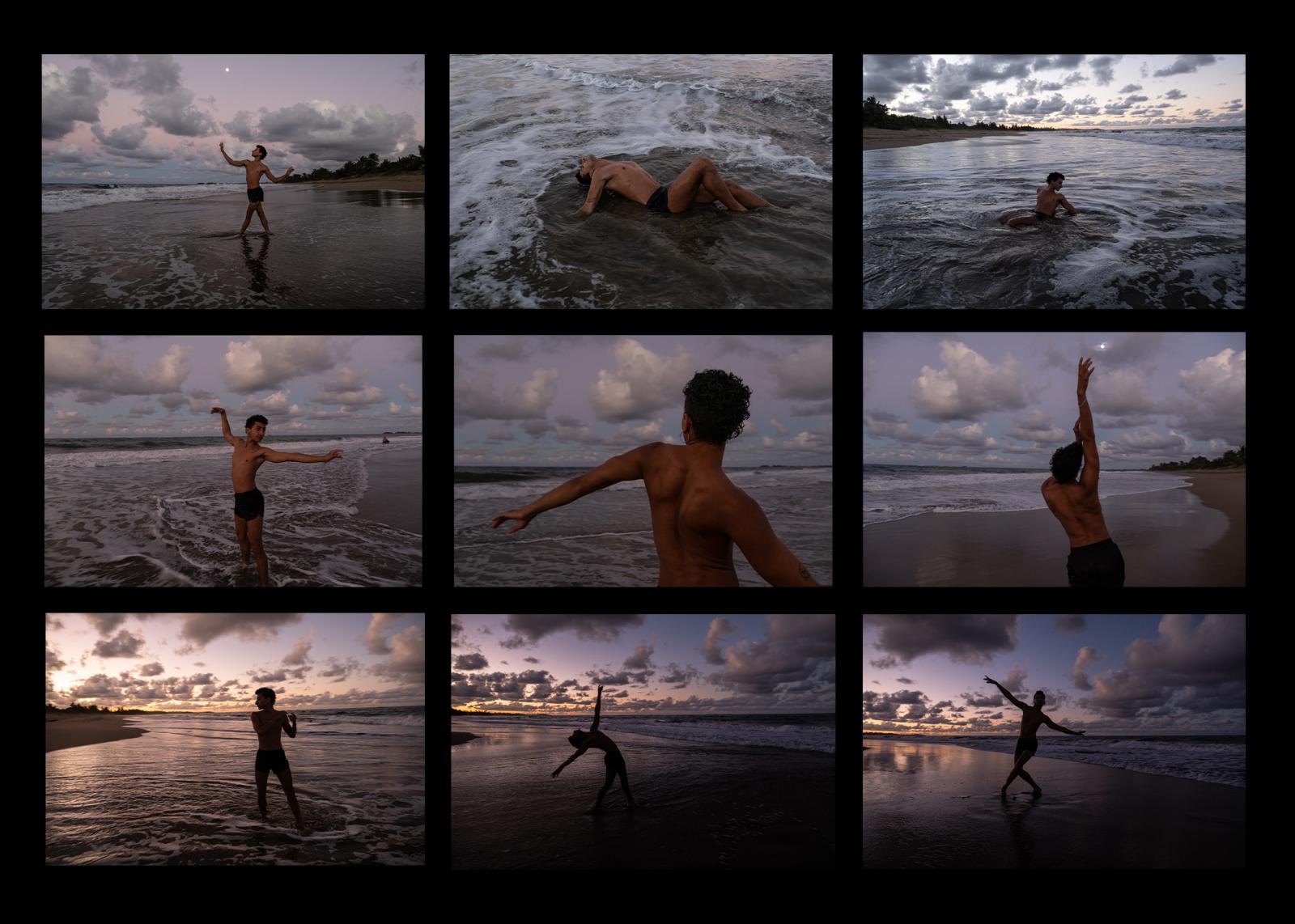 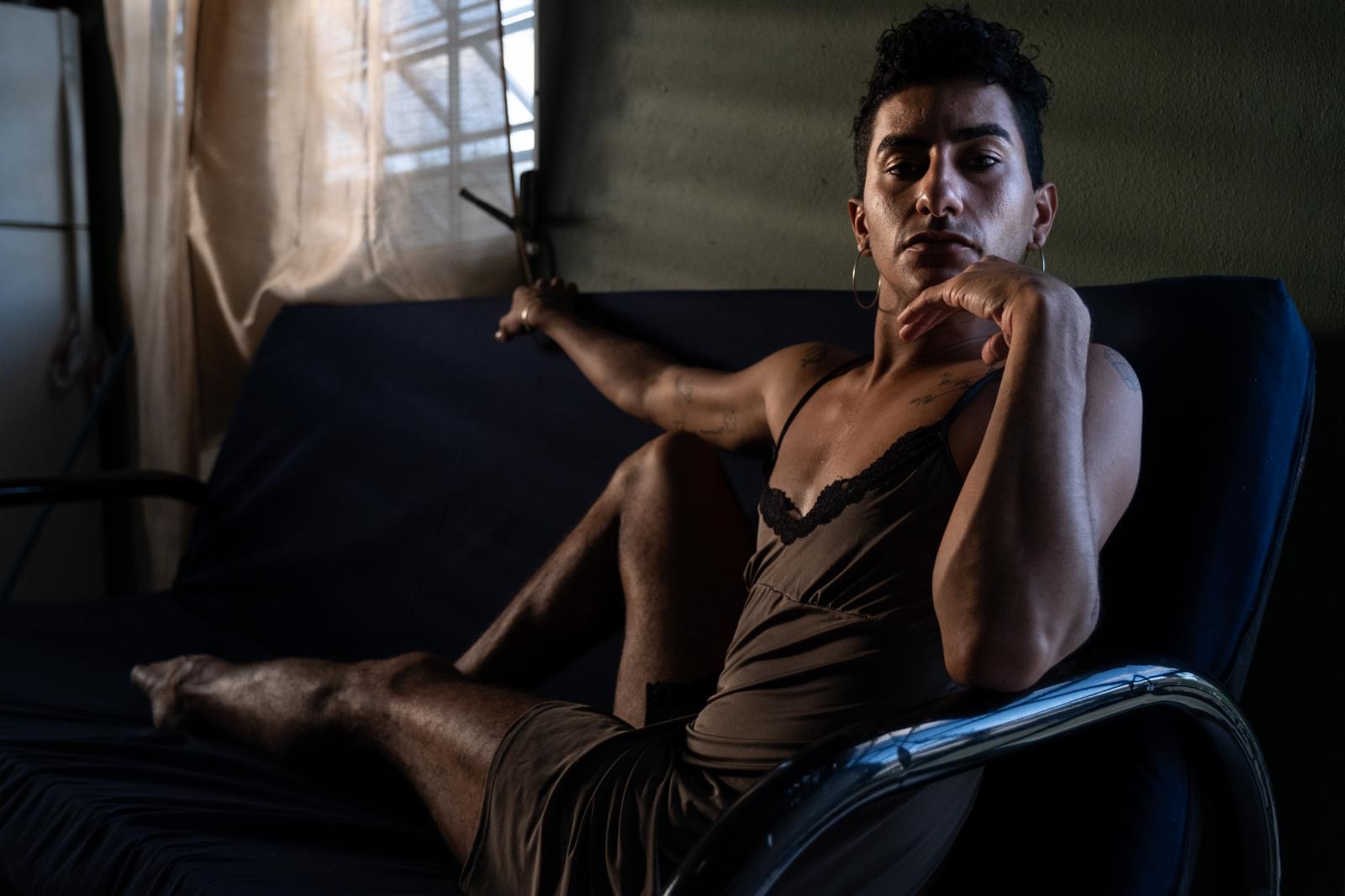 Lü, 27, poses for a portrait in her apartment in Toa Baja, Puerto Rico.
â€‹ 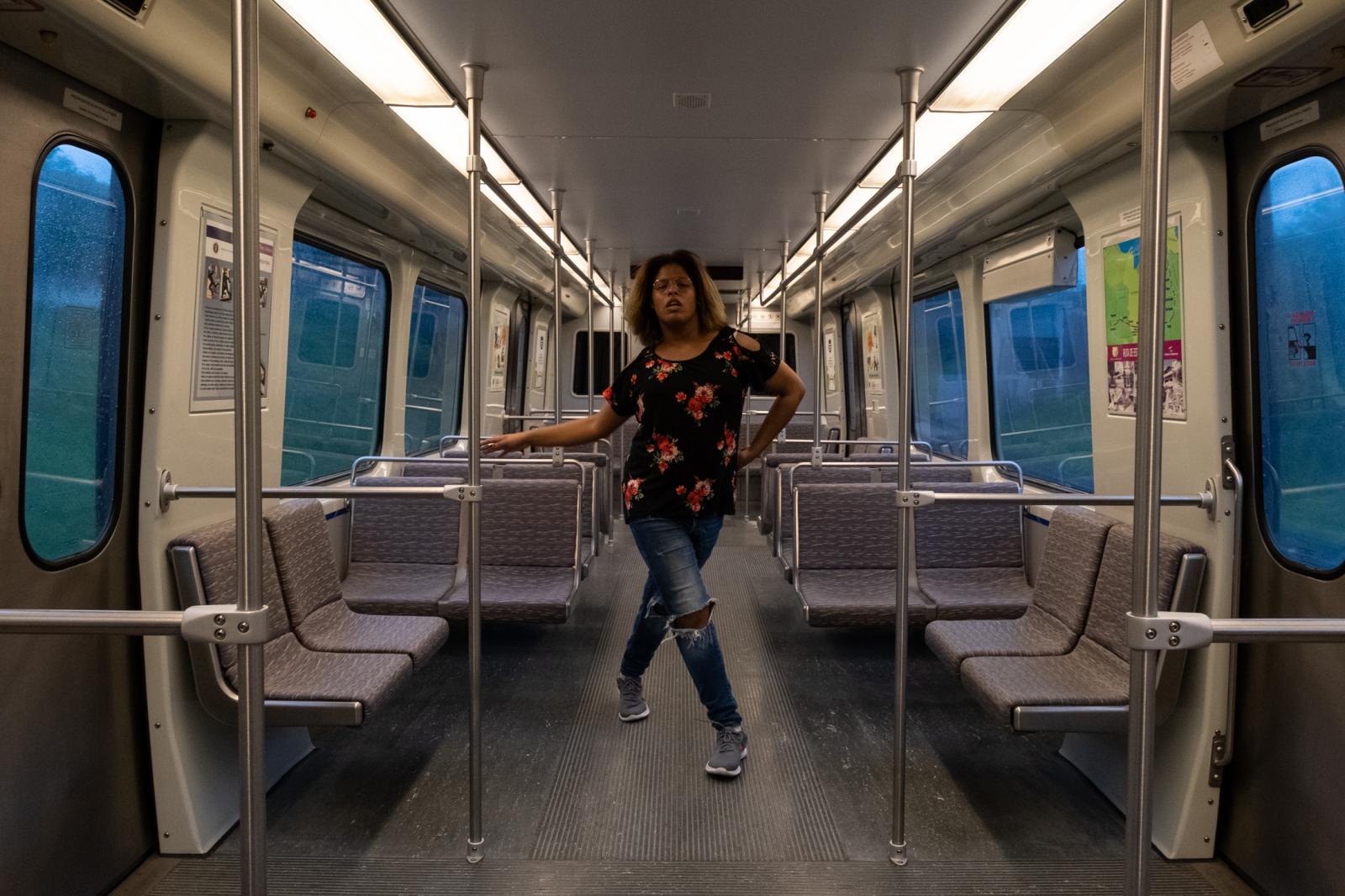 LeQueen, 21, vogues on the train she takes on a daily basis to commute to work, health check ups, and other places around San Juan, Puerto Rico. 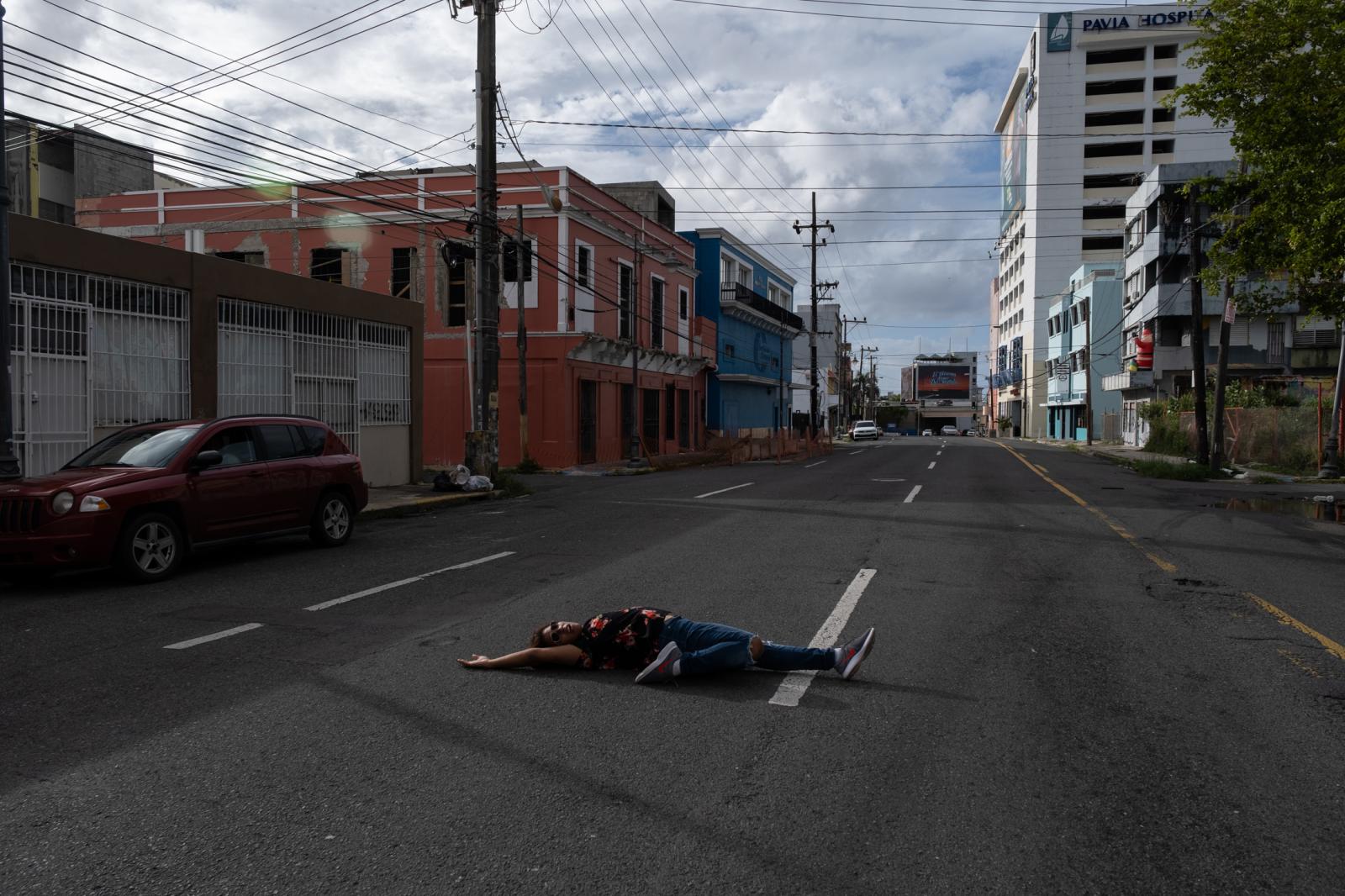 LeQueen, 21, vogues while on her way to pick up hormones at a clinic in Santurce, Puerto Rico.
“Being queer in Puerto Rico has always been a struggle, especially if there haven’t been [other] queer people in your family,” Lú continues. “On my family’s end, I have felt support, but we do not understand each other in the same way we get each other at House of Grace. It isn’t the same relationship.”

In essence, House of Grace has become a “chosen family”—a group that can coalesce alongside, or more often in the place of, its members’ biological relatives, and works to provide authentic kinship and the support to which queer individuals are often denied. It offers space for individuals to discover their truths, and to live them; to develop nuanced relationships and find partners in love and crime, teachers and students, cheerleaders and confidants and therapists and advocates.

Members of such families can take on heteronormative, hierarchical roles—such as those of “house parents” in the drag and ballroom scenes, for example—or work as a collective in which responsibilities are shared as equitably as possible. Many of the House of Grace’s members credit María José as a mom figure; to Lú, she is one who provided them tools to heal and cope with everything from a “ lack of love” to a “[lack of] lunch.” (But the House, María José notes, aims to become a decentralized space in which all its members can parent each other.) 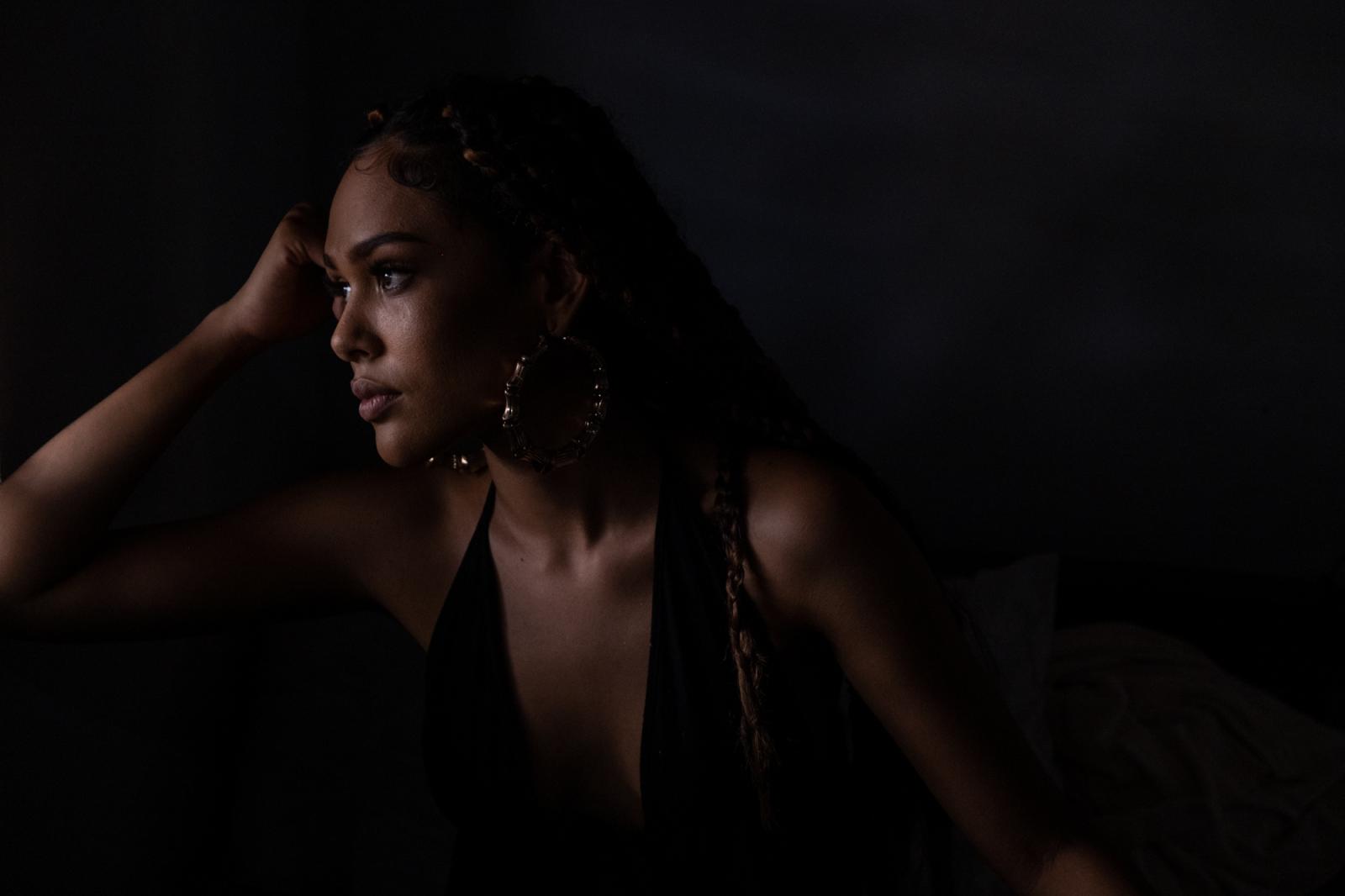 Coco, 21, poses for a portrait in their family home in Camuy, Puerto Rico. 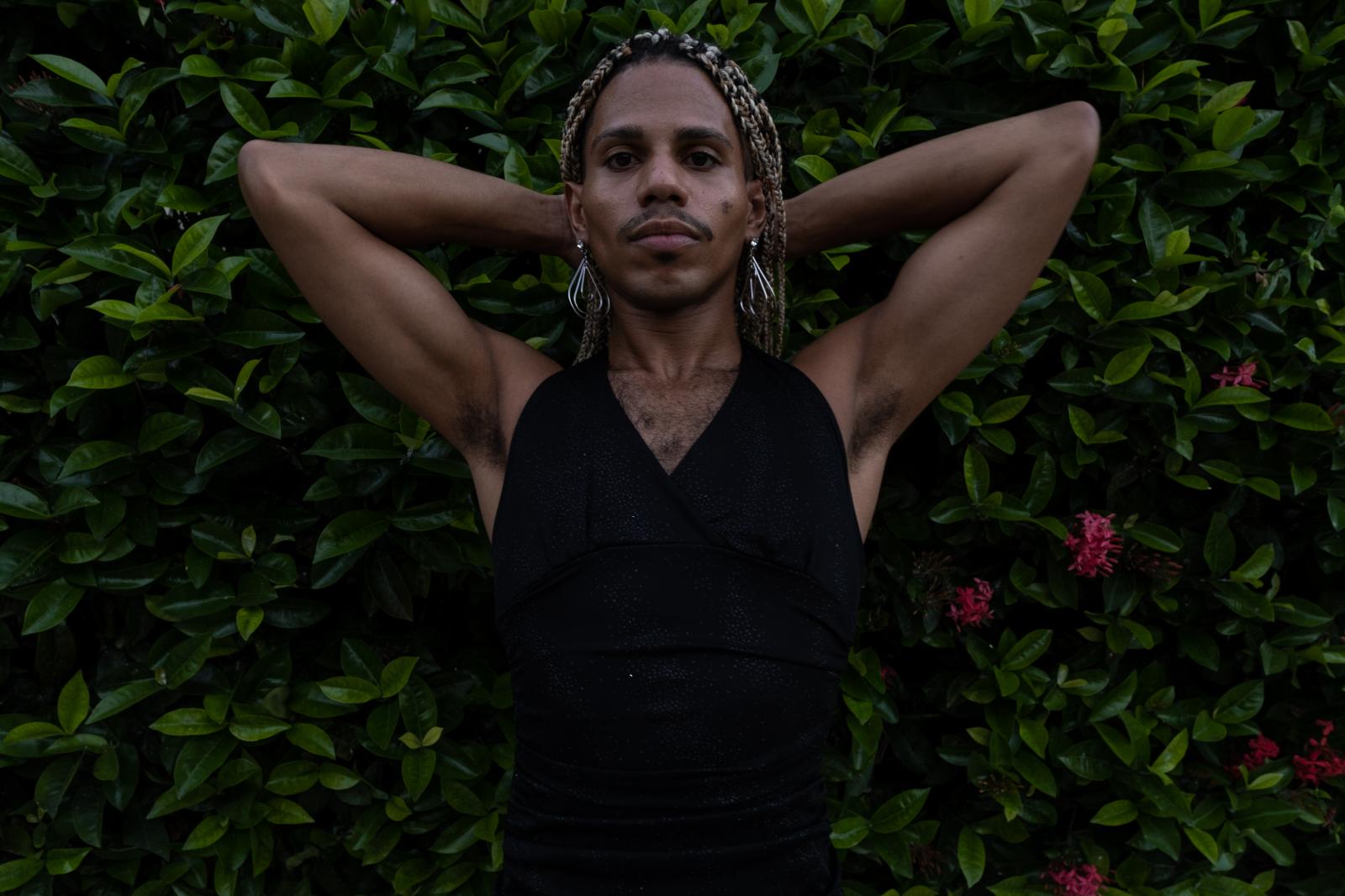 Coqueta Daniel, 25, poses for a portrait in her apartment in Rio Piedras, San Juan, Puerto Rico. “All the members of House of Grace have chosen this as their family because they know they don’t have the same support in the same way elsewhere”, she says. “This is such a terrible and cruel world to us. This support is necessary.” 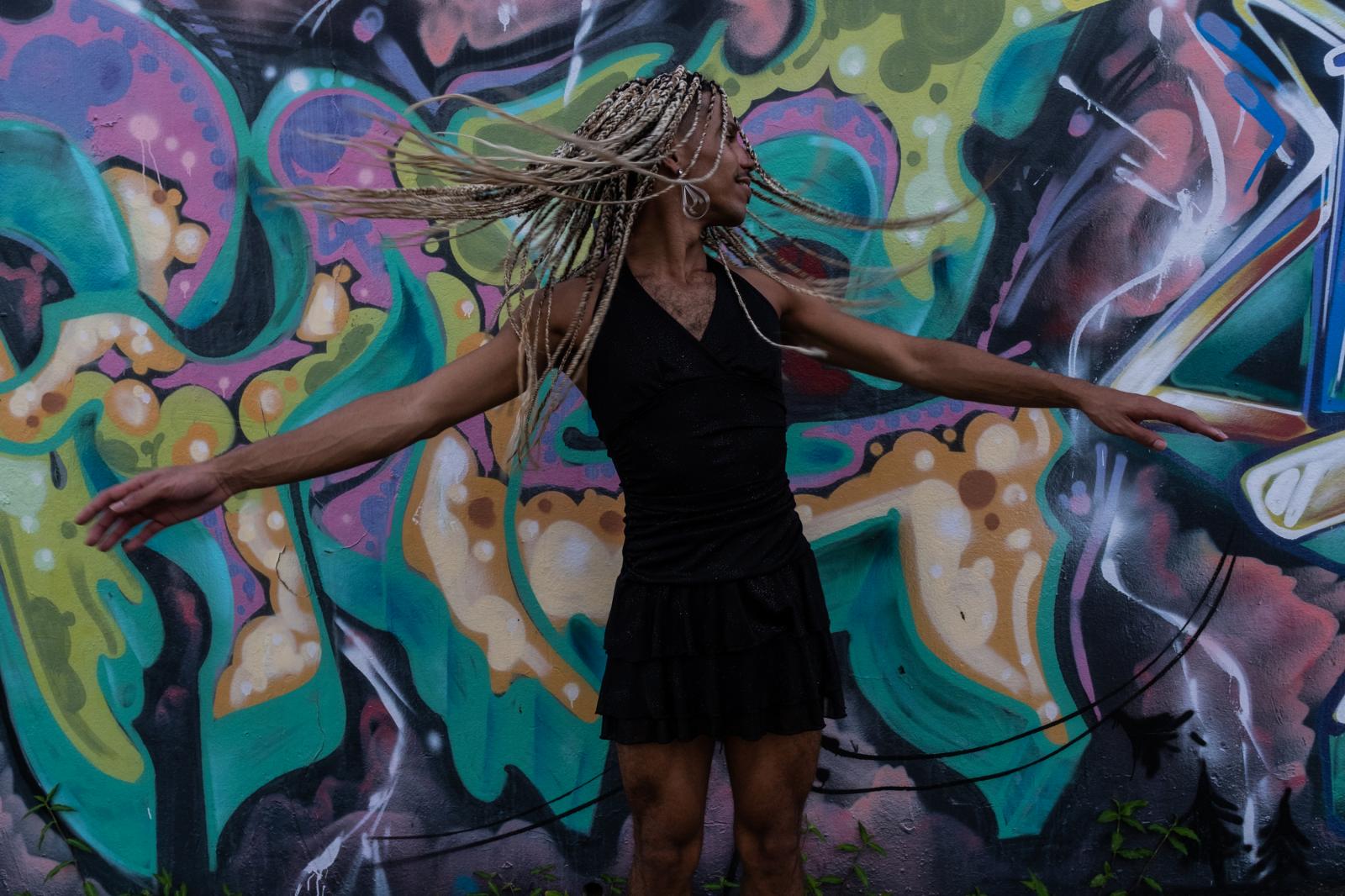 Coqueta Daniel, 25, poses for a portrait in her apartment in Rio Piedras, San Juan, Puerto Rico. 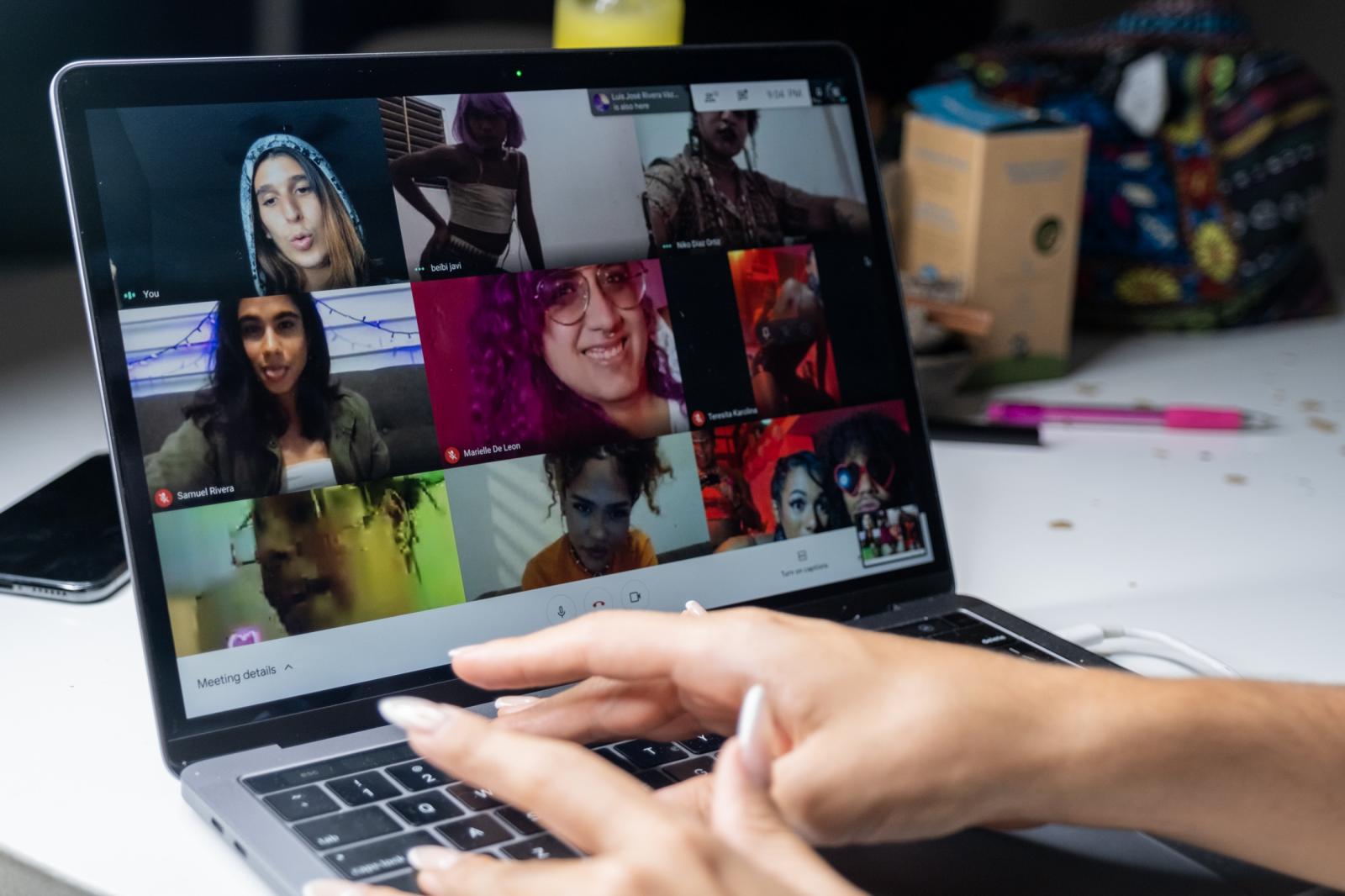 Throughout the pandemic, members of House of Grace have weekly meetings and check ups on Monday evenings.
Trans people in Puerto Rico face systemic discrimination at work and public spaces, and are at a disproportionate risk of anti-gay and anti-trans violence and hate crimes. According to official records, 6 trans people on this island of only 3.1 million were killed in 2020—a devastating toll to begin with, and one that the queer community believe is drastically undercounted. It is believed that nearly 10% of last year’s officially reported femicides were transfemicides—such as the February 2020 murder of Alexa Negrón Luisiano, a killing which received much media attention but remains unsolved. This total is three times the toll of 2019. (Sexual harassment of trans people is equally widespread and ignored; Lú experienced it in a former workplace with few consequences—though, they note, fellow House of Grace members offered much emotional support.)

And the issue is compounded by the unreliability of Puerto Rico’s government when it comes to data and records-keeping. During Hurricane Maria, for example, the government asserted a death toll of 64, but was forced to recognize nearly 3,000 hurricane related fatalities months later; a Harvard University study published in May 2018 claimed hurricane-related deaths could have reached 4,645. 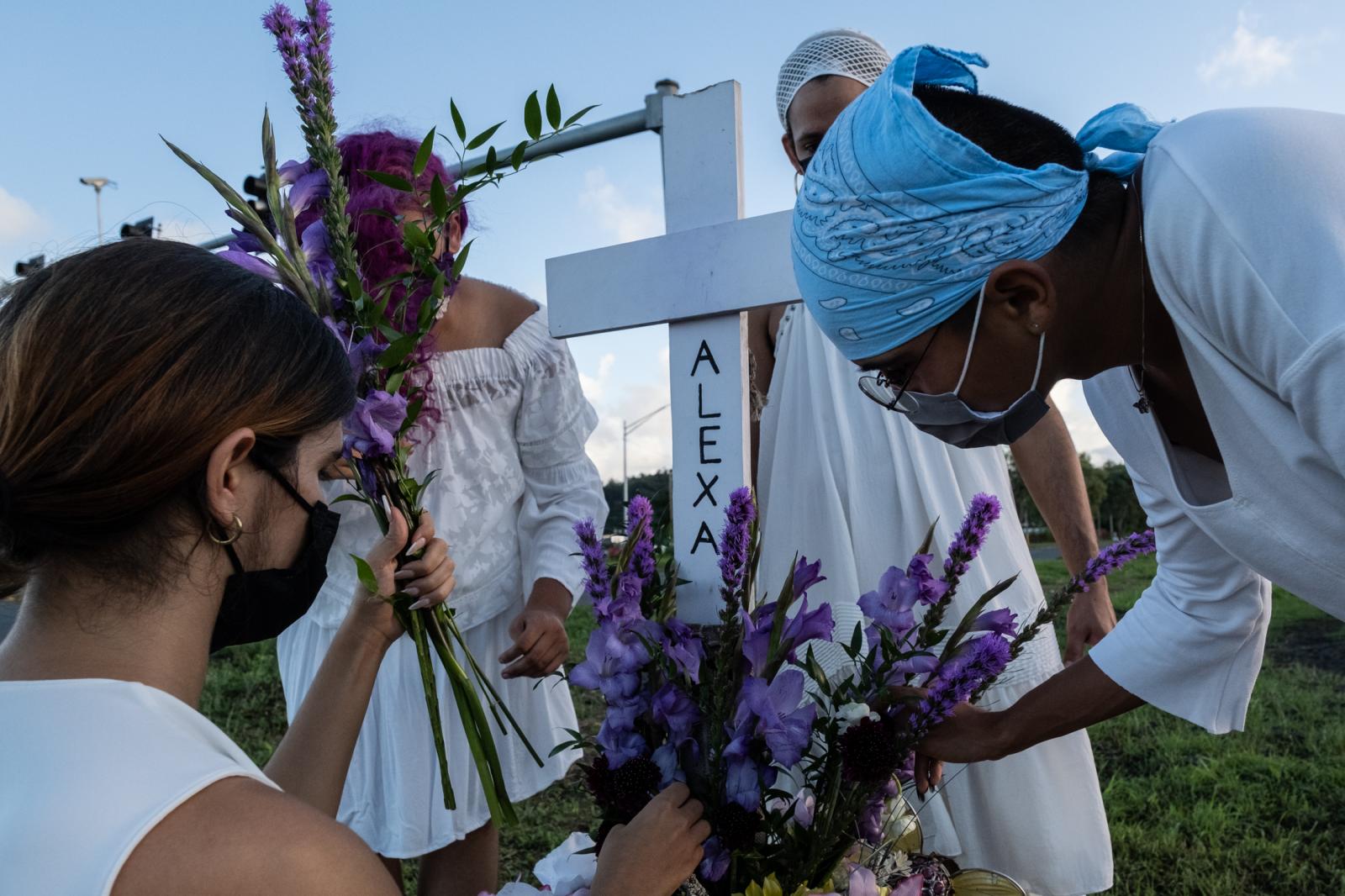 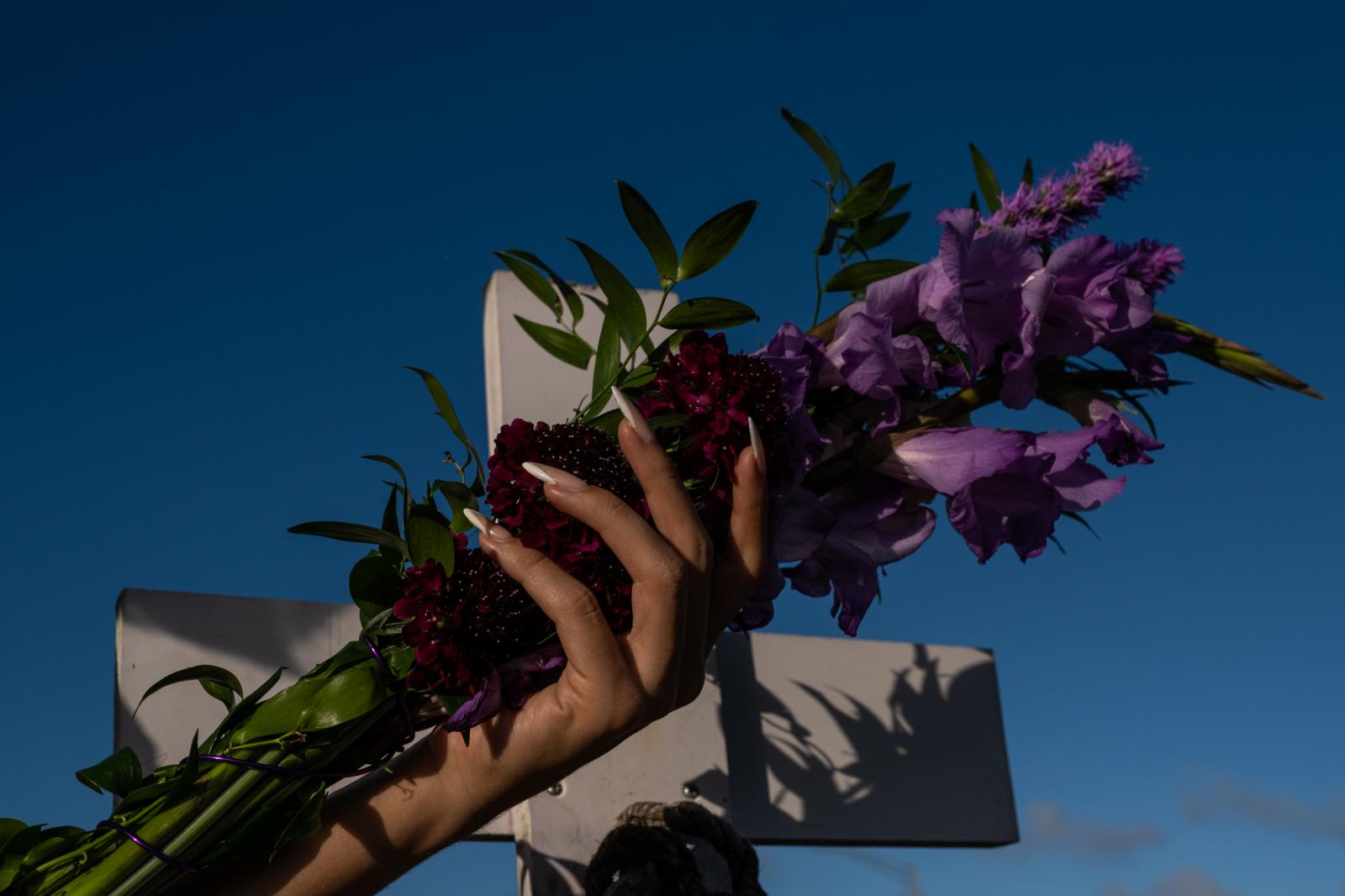 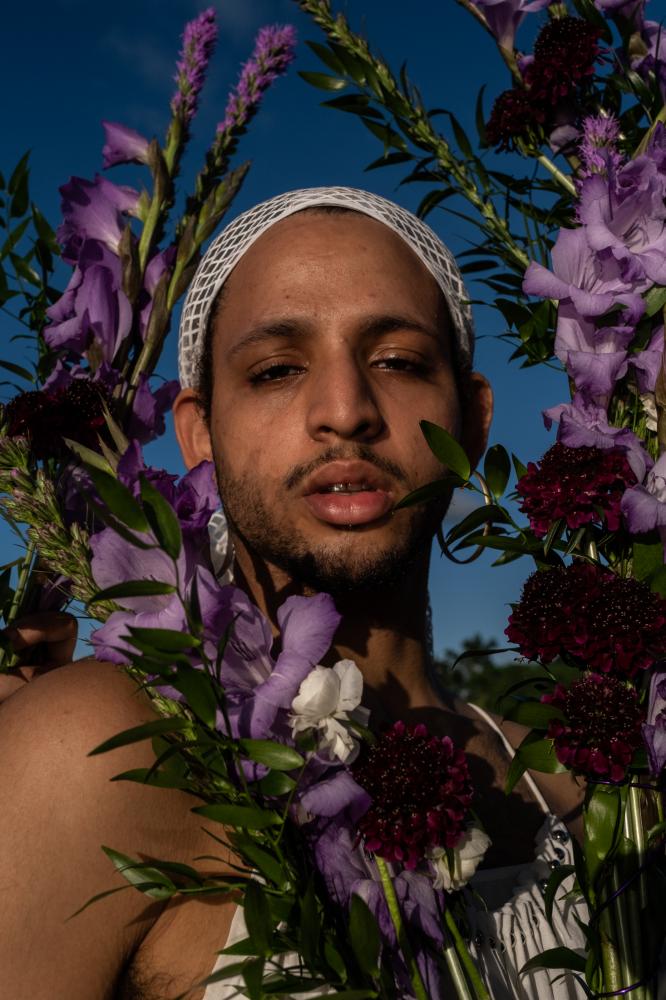 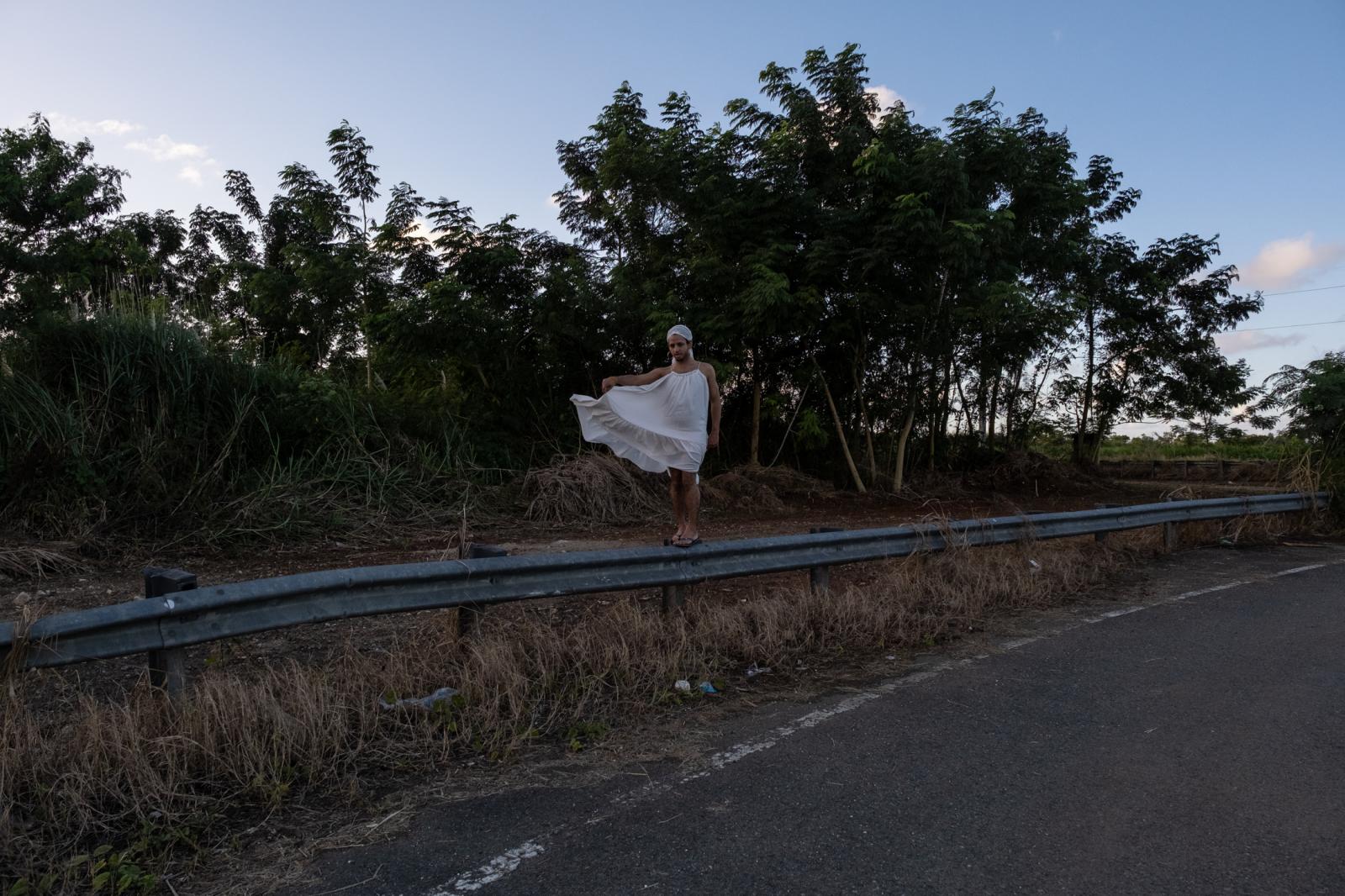 Gabi Grace, 21, poses for a portrait in Toa Baja, Puerto Rico.
“My dream as a trans person living in Puerto Rico is that we can all live freely and joyfully, not expecting violence every time we walk down the street,” explains Yeivy, 31, a founding member of the LGBTQ collective La Sombrilla Cuir (the Queer Umbrella) and a well-known queer rights activist. “We are slowed and tripped every step of the way by the government and by the religious fundamentalists that pressure officials into delaying necessary legislation. We are tired but we will do what is necessary to be treated with the respect we deserve and no less.”

Relief organizations such as Proyecto Matria, which works to provide housing and financial support to members of the trans community in Puerto Rico, cite homelessness as an endemic issue. “During the pandemic I was homeless for 8 months,” Beibijavi, a 22-year-old dancer who migrated from Ciudad de Panamá as a young child, tells TIME. “I had to leave my biological family’s house… It wasn’t a safe space for me.” During this process, Beibijavi, who identifies as a trans non-binary person, lived intermittently with fellow members of the House. 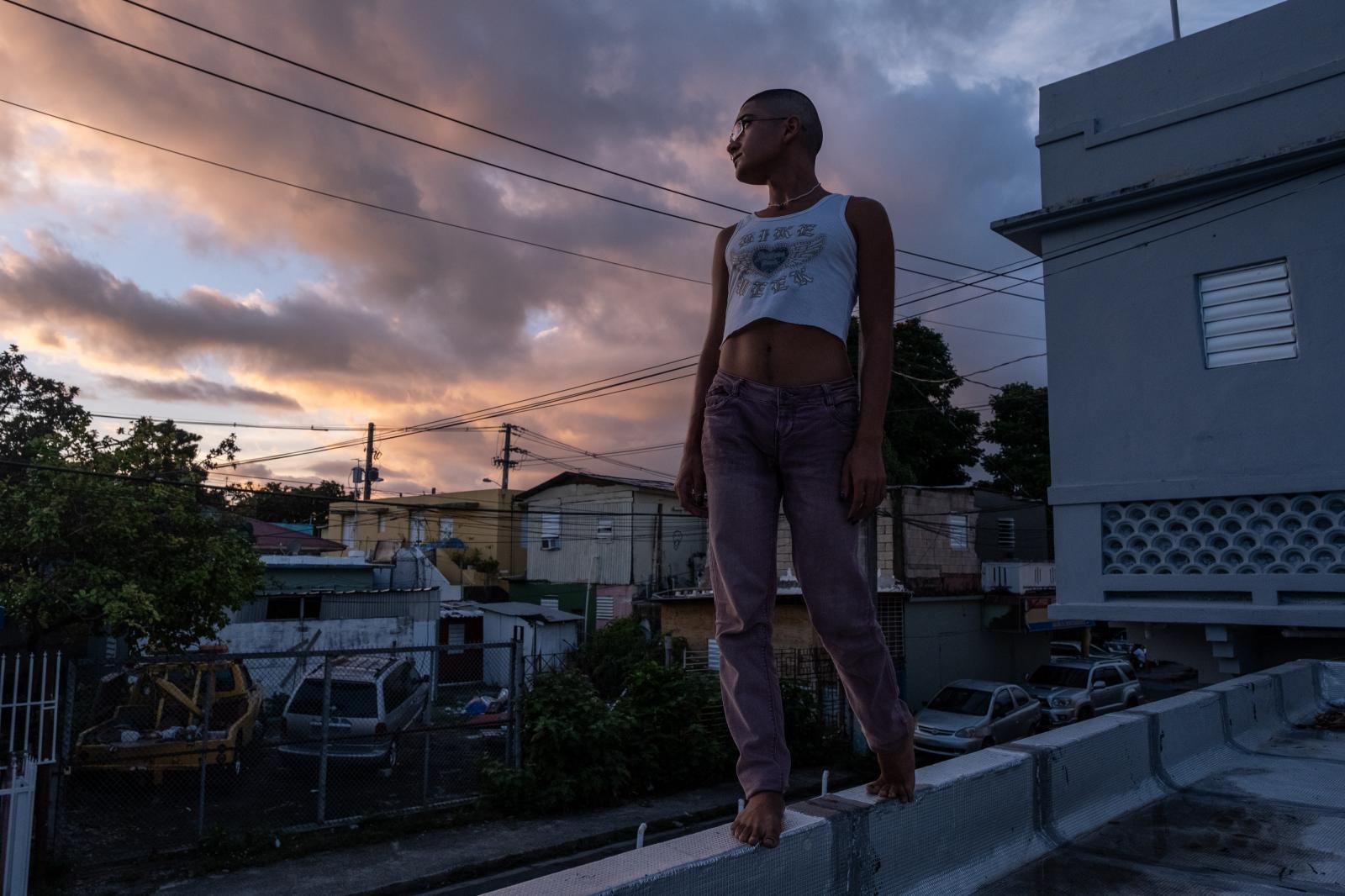 Beibijavi, 22, poses for a portrait on the rooftop of their neighbors’ apartment in Rio Piedras, San Juan, Puerto Rico. “We deserve love, support, stability, and safety. We transcend our intersections," Beibijavi tells TIME. "We are infinite.” 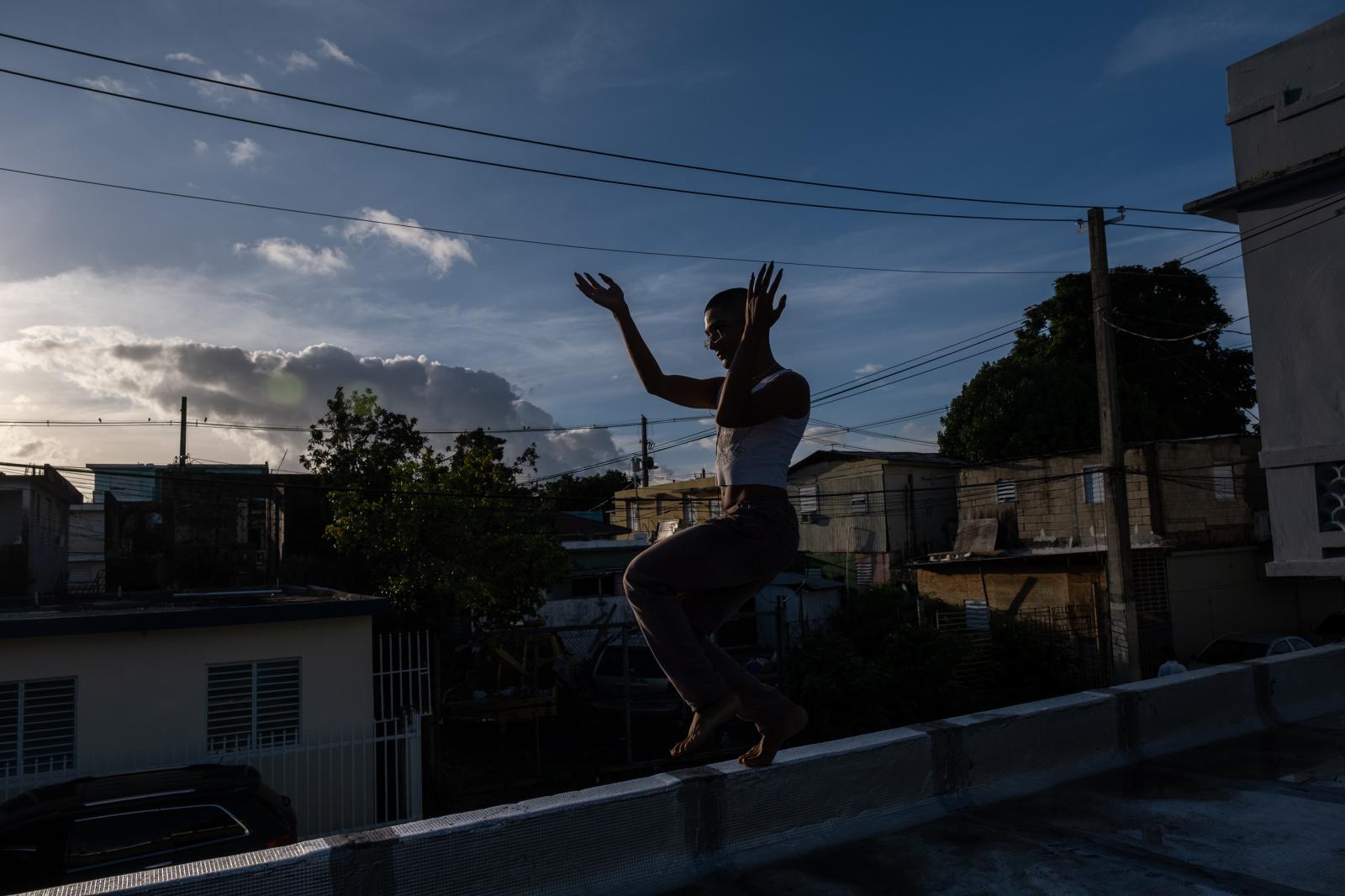 Beibijavi, 22, practices voguing on the rooftop of their neighbors’ apartment in Rio Piedras, San Juan, Puerto Rico.
Had they the collective funds to live together permanently, many of House of Grace’s members say they would do so. “Our goal is to have a house, and a dancing studio,” says Beibijavi. “We need funding.” But amid Puerto Rico’s ongoing economic crisis, the House’s daily bread is the lack thereof.

Still, the House has a special “support” group chat where they share needs they might have, so that their family can help meet them. “People are constantly checking up on me,” Lú says; when Beibijavi was living without access to clean water for a period of time, the House provided them the money to buy a filter. (The House also extends resources to members of Puerto Rico’s trans community more broadly, even if recipients are not officially affiliated.)

And to mark holidays or other special occasions, they celebrate together. Last November, in the midst of the coronavirus pandemic, they held a “Transgiving” at Lover bar, a queer bar in San Juan that serves as “a safe space for everyone,” as a poster on one of its bright pink walls promises. 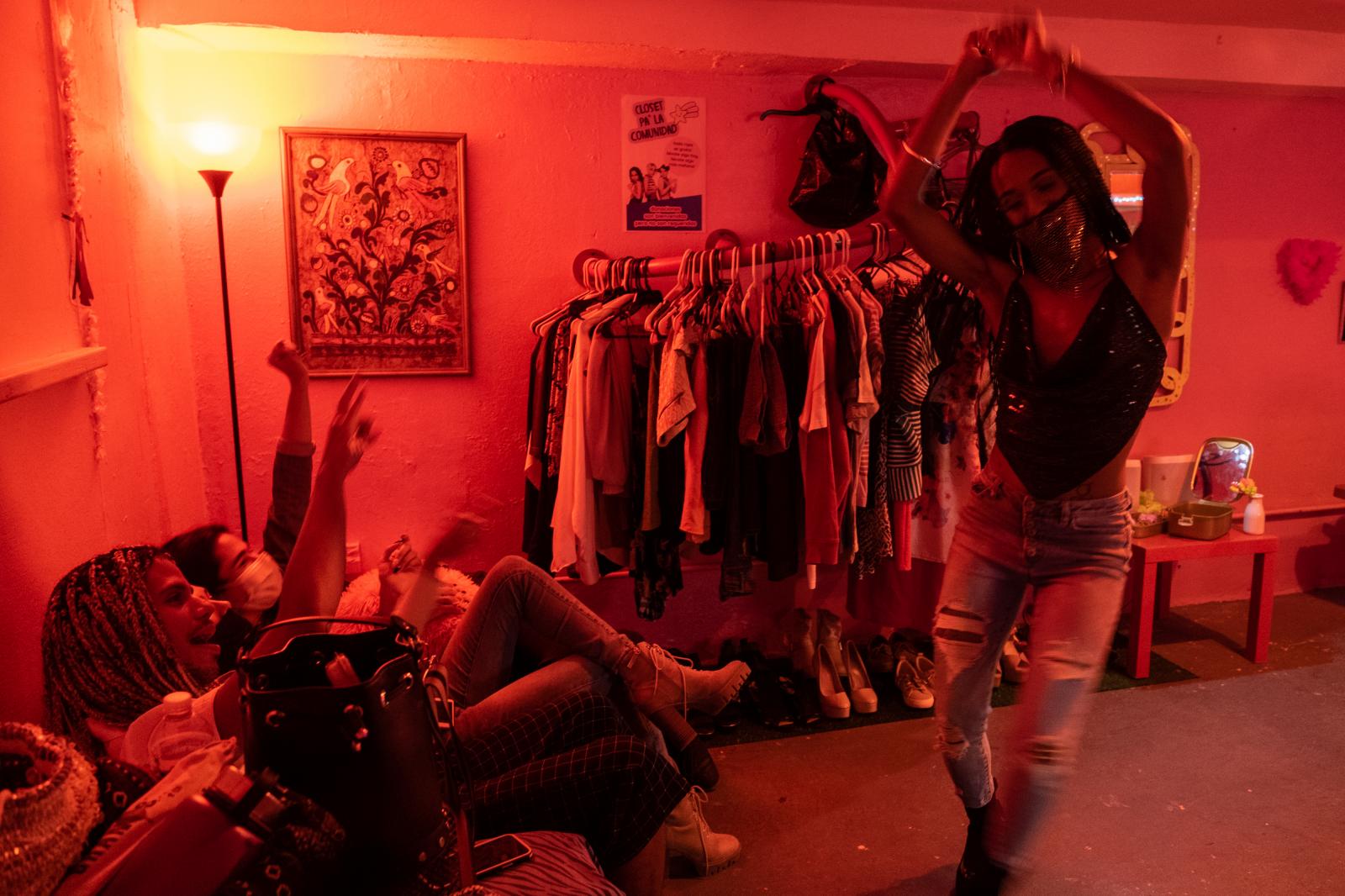 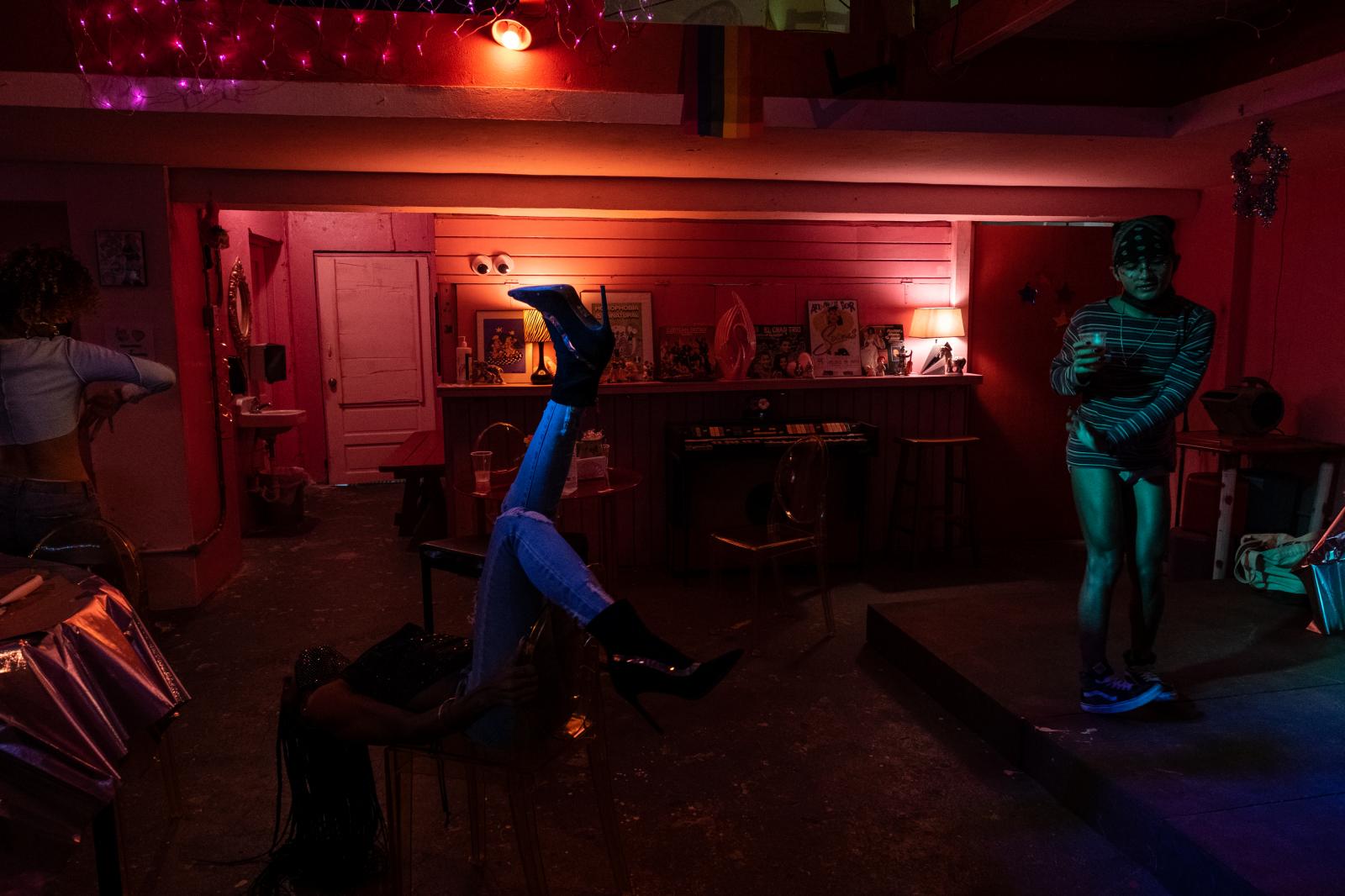 Left to right: Coco, Teresa, and Beibijavi dance during the House of Grace holiday dinner at Loverbar in Rio Piedras, San Juan, Puerto Rico.
With queer locals as the bar’s main customers—and not tourists—an innate sense of community is apparent. Wearing their masks (and safe in the knowledge they were being seen regardless), the House came together to share food, and to celebrate that they have each other in their lives and in their care.“

For me, [the act of] taking care is saying: I am not abandoning you,” María José says. “Do you know how many trans people are abandoned by their parents? I made a decision: I am not abandoning these people … I am not perfect. But I keep going forward day by day, trying the best I can to fulfill my responsibilities in a way that directs us all towards justice.” 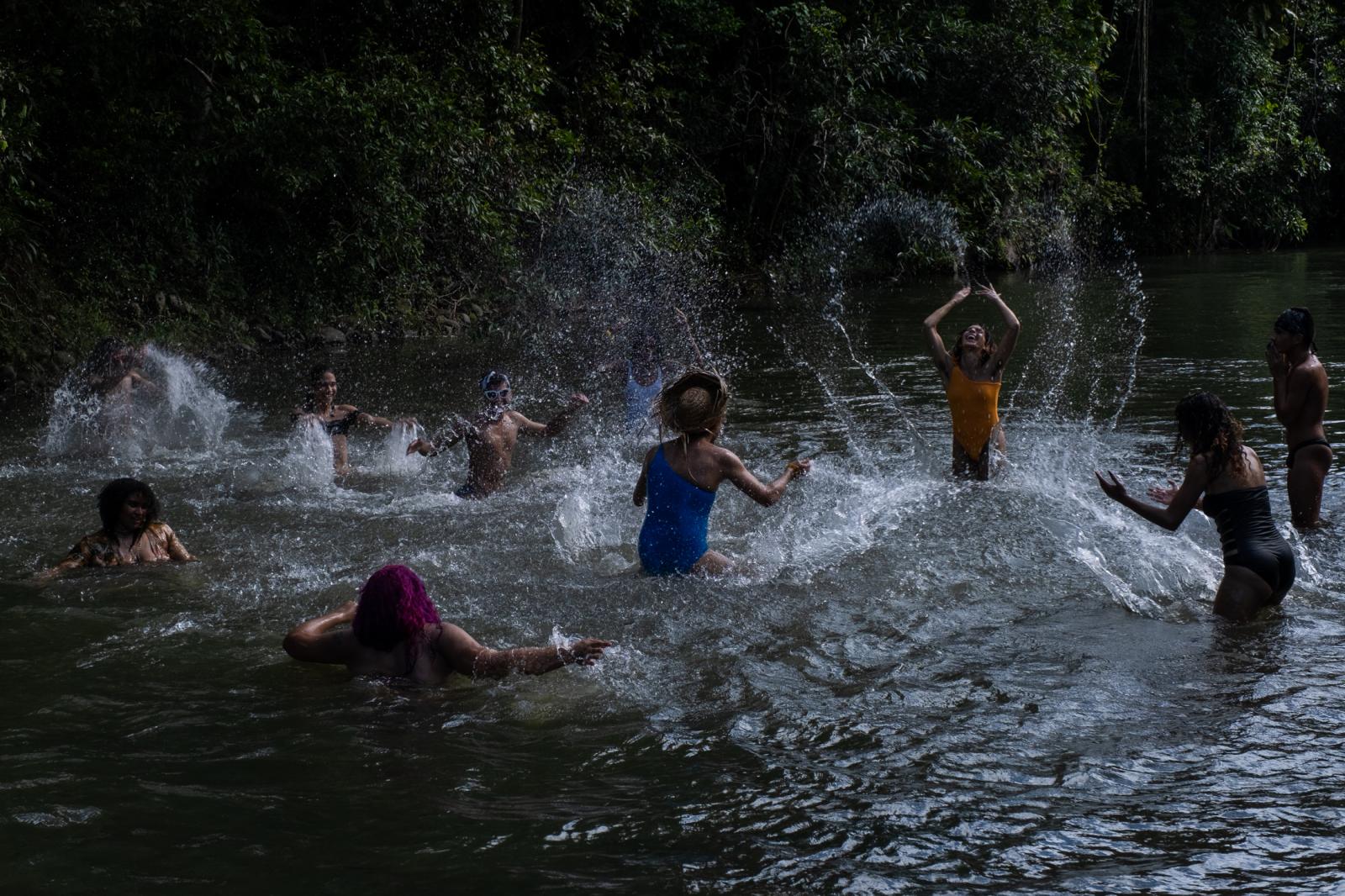 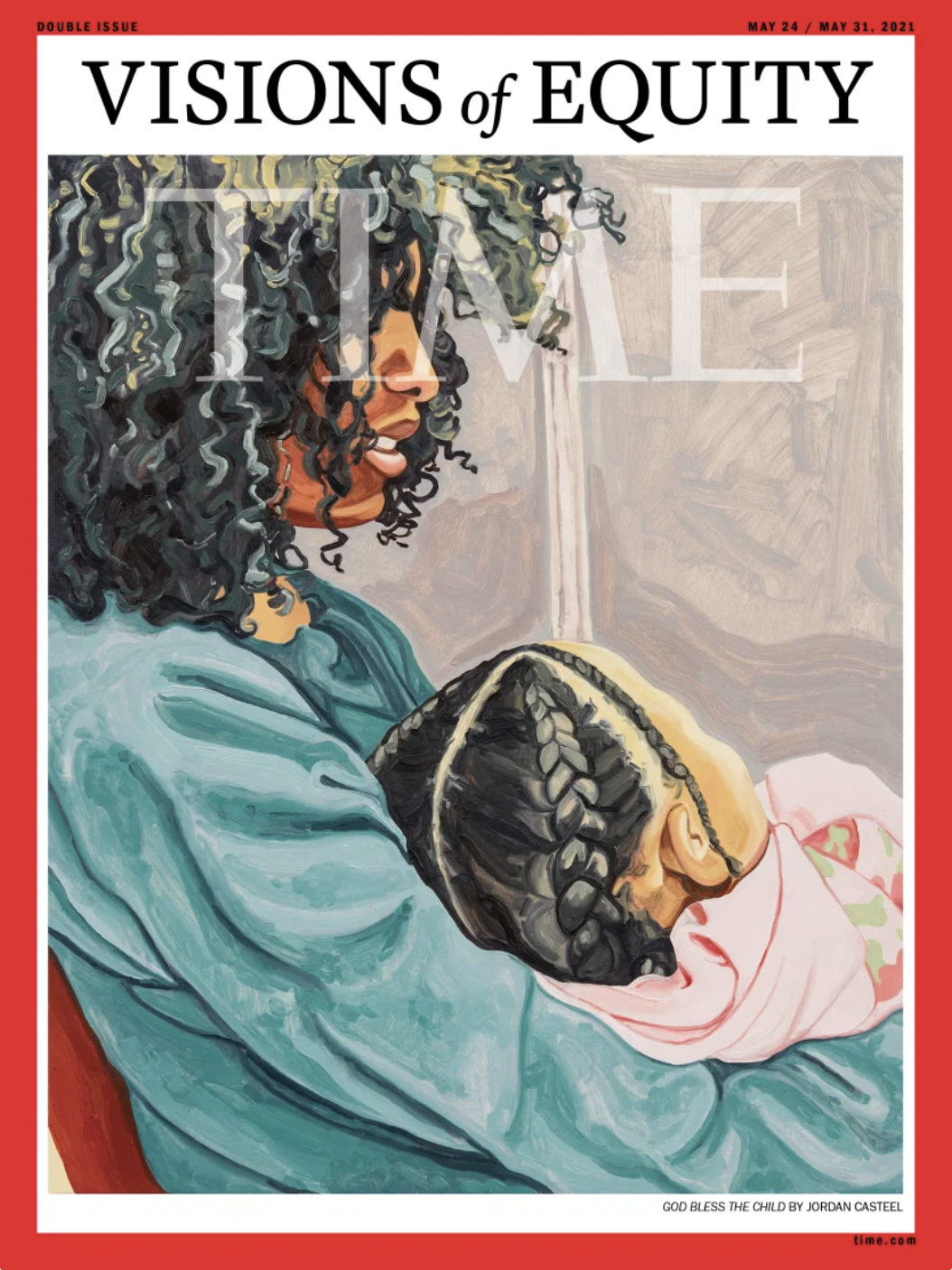 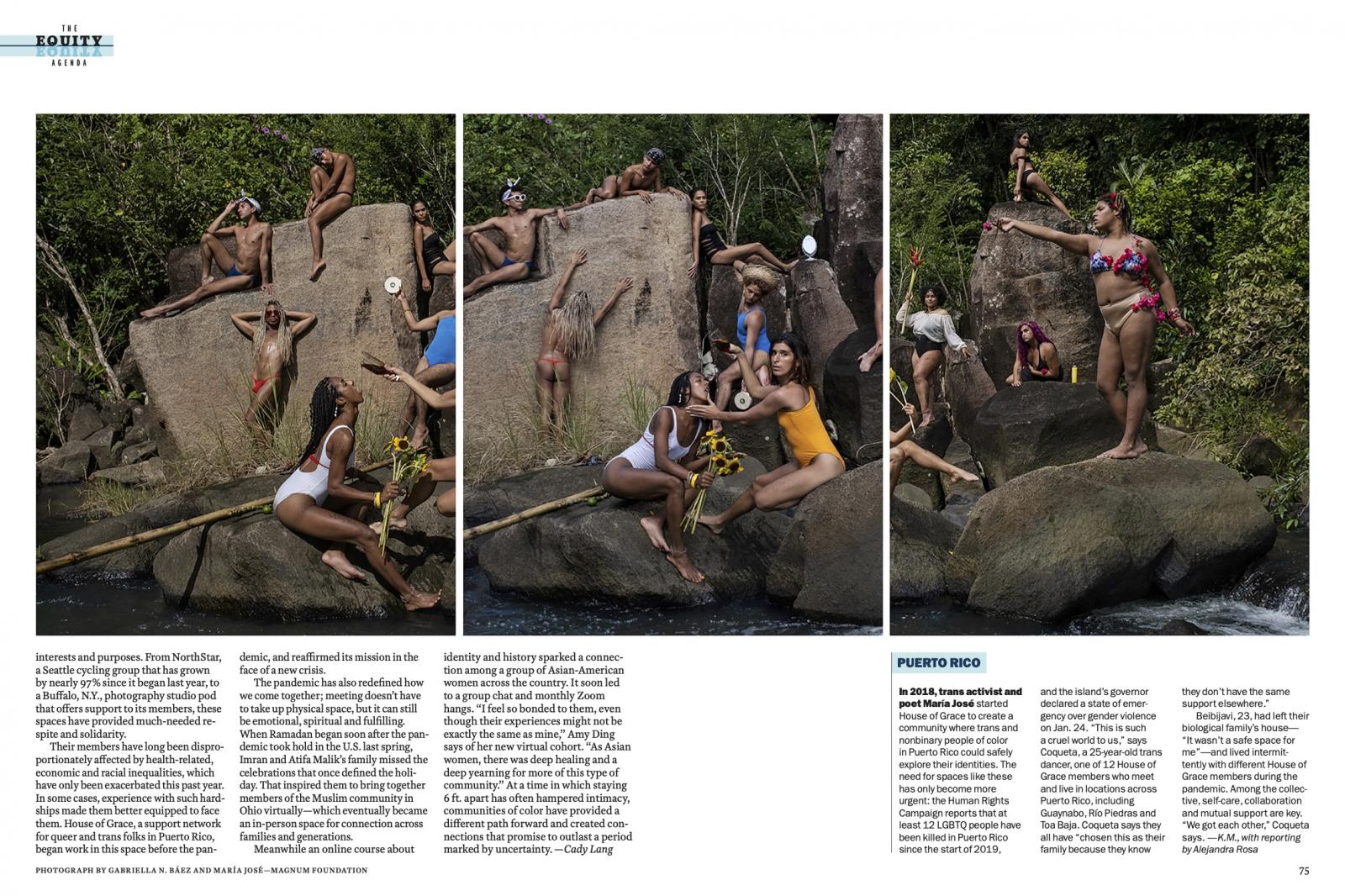 See this story in TIME

‘Here We Can Express Ourselves With Freedom’

In Puerto Rico, amid a worsening culture of discrimination against queer people, this trans collective is reimagining family values

Project supported and produced by the Magnum Foundation, with a grant from the Henry Luce Foundation. 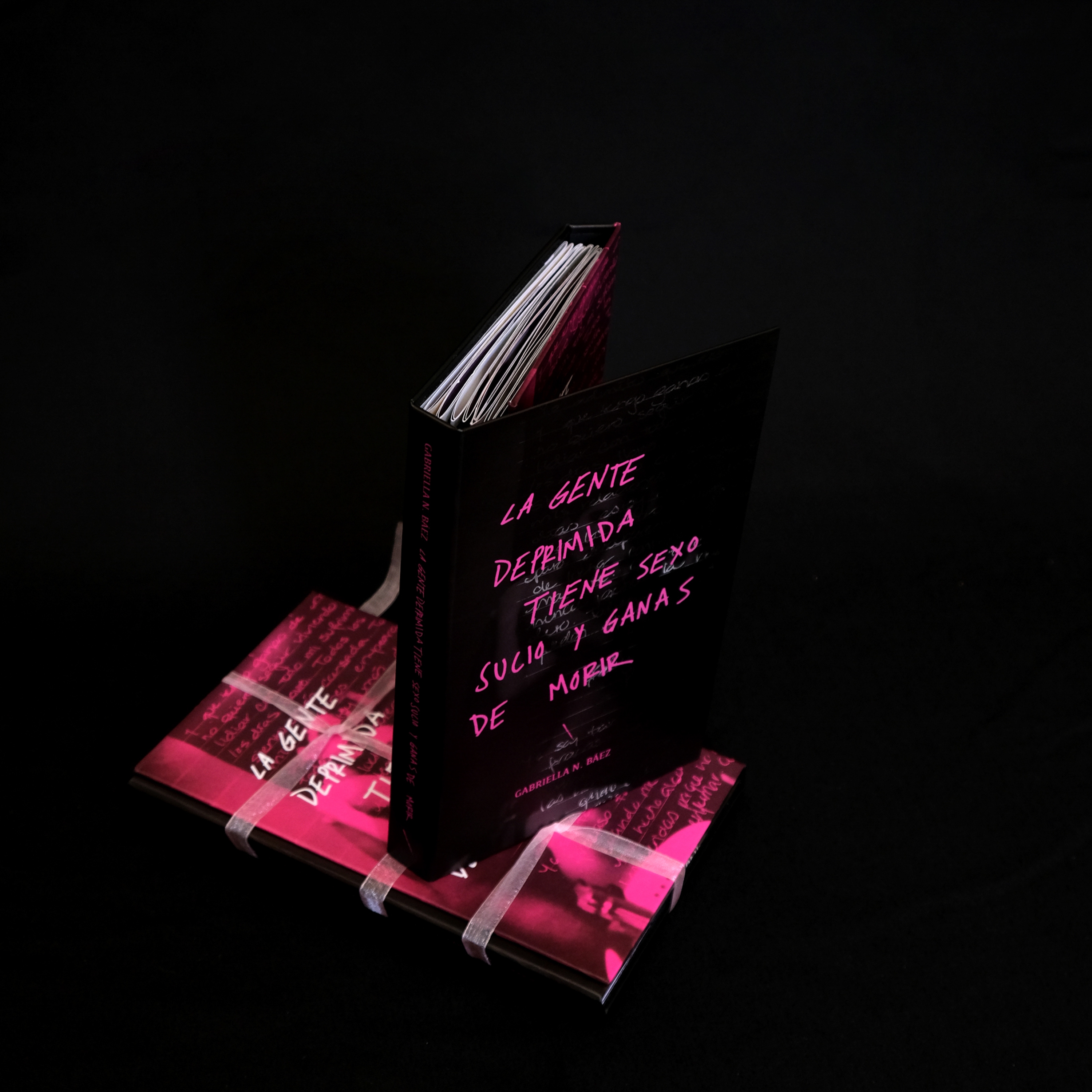 Gabriella is a documentary photographer based between San Juan, Puerto Rico.